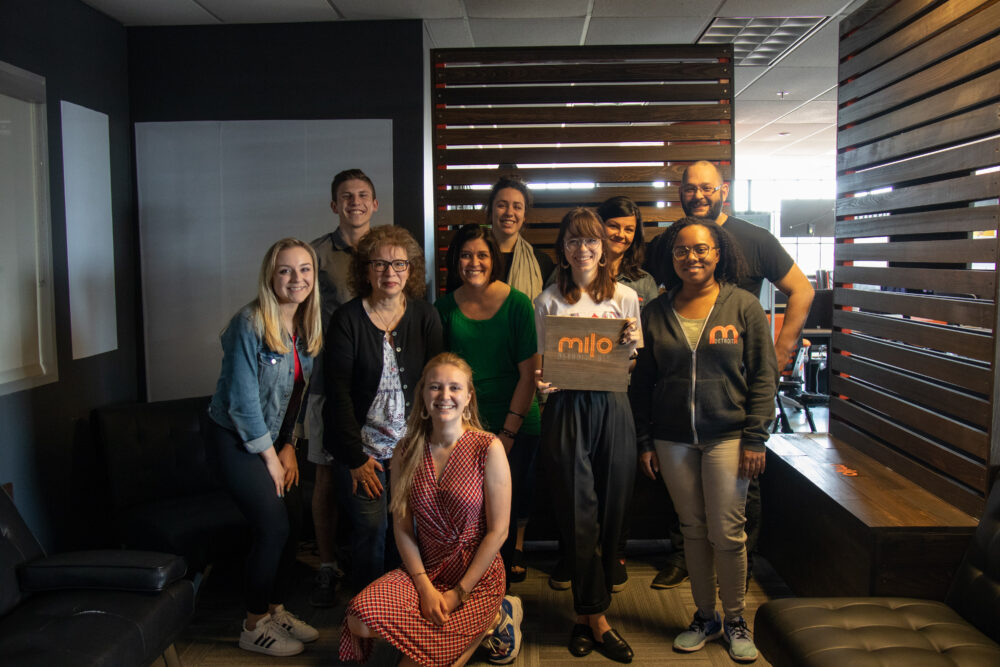 An intern’s perspective: 3 things I love about MILO

Hi! My name is Anastasia, and I’m a social media marketer and editor from Russia. I came to the U.S. as a State Department fellow for five weeks, and, for three of them, I was an intern at MILO. It was a really great time, which felt like only a couple of days. So here are three things which I liked most about working at MILO.

Professionalism. You know, sometimes a daily routine in digital can be horrifying with all those deadlines, misunderstandings and unexpected circumstances. At MILO, everything is under control. I love seeing how people in MILO masterfully rule the process, make great content strategies, create brilliant ad campaigns and still stay very peaceful.

People. When people ask me what do I like most in America, I answer ‘people’. Americans made me feel like home here since the first day of my trip, and the people at MILO weren’t an exception. In spite of different cultures and my terrifying Russian accent, as a worker, I felt absolutely comfortable. Everyone in the office was so open-minded, friendly and helpful that I didn’t suffer from any difficulties at all. Also, it was so nice of my colleagues to give me work tasks that would also be fun for me. For example, to take Detroit photos for MILO’s clients. That’s a thing that needed to be done and also acted as a kind of excursion for me.

Cultural exchange. When I came to this internship and started speaking about my country, people and Russian, I suddenly looked up on my culture in some different way. How is it possible that one of the most popular messengers is blocked, but still stays as one the most popular? Or why some Russian sweets are called ‘Bird milk’ (do they really have milk?!). There were lots of questions to think about.

I know that working with interns takes a lot of time, especially when this intern is a foreigner, and that time is money. I’m absolutely grateful for my experience at MILO and hope that this is not the last time we will see each other.

MILO and me ft. Billy

Today I want to talk to you about my boss. His name is Billy Strawter, Jr. a.k.a. Boss Bill, the founder of MILO Digital. I know I’ve mentioned him before, but I don’t think I’ve given him the credit he deserves. Introducing Billy in this blog was daunting to me because his larger than life personality and passion for the industry cannot be accurately expressed in such few words. But I’ll try…

I’ve never had a boss like Billy. He’s not just a boss, but a leader. He cares about seeing his employees grow and learn new skills within his company. Even though I am not around as often as my other coworkers, being that I’m also a full-time student, I still feel like an important part of the team. Former president and CEO of Yahoo, Marissa Mayer, said that you should, “work for someone who believes in you, because when they believe in you they’ll invest in you.” I can truly say that Billy has invested in me and my future in the Digital Marketing world at a time when I felt like no one else would.

To give you a glimpse into the man behind the MILO Digital scenes and how he came to run his own business, I sat down with him and asked the “real” questions.

Q: What made you want to be an entrepreneur? How long did you know you wanted to be one?

A: I think the first story that I remember about me being an entrepreneur was we were at a place called Ponderosa … I remember sitting there as a kid, and I said to my parents, “I wanna eat steak every day when I grow up.” They said, “You know if you want to have steak every day you need to be a lawyer or a doctor or own your own business.”

It was really all about the idea that I asked a lot of questions and I was told frequently that it wasn’t my job. I wanted to figure out how to make it my job. I spent my life trying to find the right business to be in.

Being an entrepreneur comes with failure and trying lots of different things, but I feel like with MILO and advertising, I found my home.

Q: What have been some major struggles in creating MILO?

A: I guess the answer is I never wanted to own an agency. I just wanted to do cool stuff. MILO was born out of Social COOP – I wouldn’t have been able to do MILO without what I’ve learned with Social COOP. The hardest part was I went to school for marketing, but I never worked in an agency. What I loved was figuring out how to take traditional things and translate them into digital. Then the people – saying goodbye to people, managing people, and all the different personalities. And sometimes being misunderstood, I think that’s the hardest part.

Q: How would you describe your leadership style?

A: I try to give people freedom; to make decisions, to fail, but allow them to have a safe place to fail.

The only thing that I ask is that they learn from it and that they own it. That’s so important – not making excuses for why you failed, but finding what that reason is and trying to avoid it the next time around.

Q: Who is your biggest role model/inspiration?

A: My dad. In the face of adversity, he decided to start something, to build something. He stuck with it and is still doing it. He’s been firm with me but he’s also been very fair, very loving. My leadership style is servant leadership, and that’s me emulating my dad.

That’s the thing I took away from my dad, it needs to be bigger than me and that we lead by serving.

Q: Who or what do you look to for support?

A: Obviously there’s my family, and then there’s my Leadership Detroit crew. They’ve been really helpful for bouncing ideas. It’s just been an incredible experience working with them. And of course, Jen’s [Billy’s wife] probably heard me complain about more things than anyone. I wouldn’t be able to do what I do now had she not gone back to work when I decided to start doing advertising.

There’s that sacrifice, living with the ups and downs of being an entrepreneur.

I couldn’t even have done it without Savannah [Billy’s daughter]. She’s made a sacrifice of not having her dad around as much as someone that works a 9-5 would be.

And then Dmitri [MILO Digital Strategist] is my right hand.

Q: Okay. You have your idea, now what? Is there a specific starting point, or is it different for every business?

A: Just do it. There are all sorts of reasons you can talk yourself out of starting a business, but it would be a shame to silence whatever little voice that told you “you should” and “you could,” because clearly there’s a reason that you’re considering starting something.

Q: What is something that many entrepreneurs may not be prepared for?

A: For me, I had to be prepared to lose everything.

You can certainly plan to mitigate some of the risks, but you also have to be prepared for that – It’s a real possibility.

Q: If you don’t have a lot of personal funding to start, what do you recommend?

A: Get creative. You may have to work lots of hours, you may have to wear lots of hats. I learned how to do what I could do, and anything I couldn’t do, I’d find someone in my similar position that could assist.

Q: Have you ever had a rough patch or feeling of doubt? If so, what did you do to keep going and be successful?

A: I just have to quote Yoda, “There is no try, only do.” There’s no other option. When I wake up in the morning, there’s no one telling me I need to get up at 5:30 in the morning. There’s no one saying I need to be here until 8 or 9 p.m. or 1 a.m., it comes from inside. It’s just a drive that I’ve always had and wished that I could give that to people, but you have to find that drive internally.

Q: Where do you see yourself and MILO in 10 years?

A: Ideally I’d love to see MILO in the hands of the people who helped build it and doing big things. I see it being bigger than me and it no longer being about Billy, but being about MILO and the family that we’ve built, just on a bigger scale.

Q: What’s the biggest reward from being an entrepreneur?

A: Getting to do something that I believe in every day and watching people grow.

Seeing people start somewhere and taking them from being shy or not quite confident in what they do, to watching them blossom into their own person is really incredible. Watching them turn from someone that is maybe an intern, to a leader. And working with the clients because they’re just good people.

I’ve only known Billy for a short while, but he has made a huge impact on my life. He’s taught me so much but one thing Billy has said that stuck with me the most is,

This is how he looks at life. It’s fearless.

Here is something we should all think about today: have you ever backed away from a challenge in fear of failure? Billy had a long winding journey on his road to success, but it never stopped him from waking up the next day and working harder than ever. He is an inspiration to all those who know him, yet the most humble man I’ve ever met.